What is a mountain if not impervious to the desires and endeavors of people? 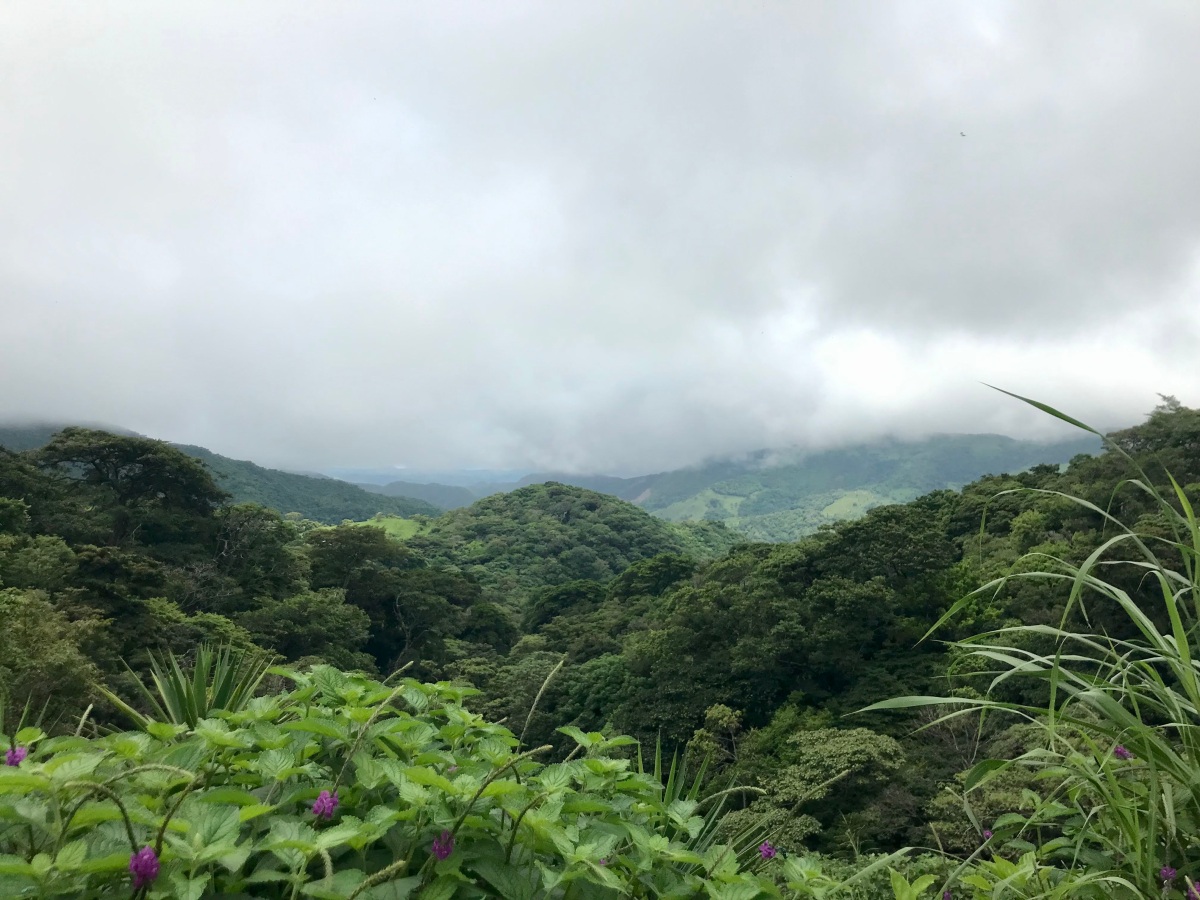 I am 69 years old. I was born there in INVU (a part of San Luis, Costa Rica). My father lived there. There, we were raised and later we lived in Alto de San Luis. When my father was there, it was nothing but forest. There was not a house, only him. A lot of forest.

It will be a long drive, I tell my students, up a winding road. They are excited and giddy. They have waited for hours in the airport café for us to arrive, after delayed flights and frustrating missed connections, slow immigration lines, and little food. At first, they comment on everything – the brightly painted walls, the city lights. They quickly tire of the topes, or speed bumps, that keep our trip slow and jostling. The nausea begins, the requests for Dramamine, and then they quiet. One vomits again and again, stopping us on the highway, in small towns, at the forest edge. They all drop off to sleep, exhausted from travel and the medication, but I remain awake, eager for my return after so many years. Darkness wraps us and, as we climb into the mountains, lights fade away. I feel glad when the trees begin to arch over the road, when the land becomes wilder.

As we turn onto the road to San Luis, my heart jumps at each familiar landmark. I know the edge of the road hides a long drop off the side of the mountain range. I don’t mention this unseen terror to my companions. I see the place where there was a rockslide. I see the cemetery. We must be there. We keep driving. I finally note the hand-painted circular signs pointing to our lodging for the next six weeks – Casitas de Montaña Cabuya. We head up, then steeply down to the small houses ready for us.

My daughter and I settle into our little house above the main campus, noting both the cheery bedspread and the holes in the walls, the lack of a mirror and the open kitchen. Our hosts assure us that the walk to the main campus is short, even if it was steep enough that our van spun its wheels and stalled multiple times trying to gain traction to climb the hill. There is no wifi, no lights outside, no sense of connection to anywhere but the little house we are in. We sleep together, eschewing the separate beds that have been made up for us in favor of curling close to the warm body and heartbeat of the other. It feels as if we are the only two people in the world, surrounded by a forest filled with unknown and potentially dangerous beasts. Instead of feeling familiar and comfortable, as I had on the drive, I absorb some of my daughter’s anxiety of being in a strange place.

In the morning, we see that we are next to another house, not so isolated after all. The main area of the casitas features two tremendous views, stretching out all the way to the gulf of Nicoya over volcanic hills and valleys. Coffee bushes, a small organic garden, and flowering plants grace the grounds. Our hosts are quick to point out the many bird species who call the area home. The flowers draw butterflies and hummingbirds. The casitas have porches that look out into lush plants that mask the dramatic drops to land below. Above us, cattle graze on a steep green slope, their hooves having worn narrow terraces into the thin soil. Vultures, swallows, and the occasional white hawk take advantage of the thermals and soar overhead. Clouds and rain drift in and out, sometimes exposing patches of blue sky or a mountain that was out of view.

As I stand on the porch of the comedor, or dining hall, sipping their exquisite coffee, Don Mario approaches. We gaze out at the view covered by thick forest, clouds and fog, tall trees, and the occasional home. He says, “Forty years ago, everything looked like that hill,” gesturing towards the cows’ relatively denuded pasture. “You could walk for days and not come across tracks of a puma or of any animals. Now, if you walk even a short distance, you can see signs of all the animals, returning to the forest.” He explained the change began in the 1980s, only becoming more rapid as ecotourism began to take hold in the region. Now, people have organic gardens, small coffee holdings, and plants that entice birds and animals that tourists hope to see. He spoke with pride and enthusiasm about the changes and reforestation.

Although I have translated his words as “forest,” the word he actually used was “montaña.” When I conducted interviews in San Luis in 2007, I heard the phrase “pura montaña” over and over again when people described the region in their parents’ and grandparents’ time. “Era pura montaña.” It was pure mountain. At first, I was confused. Had people altered the physical geography that much, leveling hills? I finally realized that native Costa Rican speakers were translating the word as forest. I knew the word for forest, though: bosque. In fact, I saw it used locally, where people talked about the bosque nuboso, or cloud forest, that supported a wide range of rare species. I also knew how people talked about wilderness – silvestre, selva (though the common desierto seemed unlikely in this context). Why montaña?

The class I am teaching involves learning to write about place. We emphasize that places are spaces made meaningful. Places contain relationships, symbolism, stories, histories. Likewise, landscapes encompass ideas about place for those who perceive them. Writing about the ancient Maya, Brady and Ashmore state: “landscapes are far from passive arenas or stage sets; then as now, they have played tangibly active roles in constant creation and shaping of Maya life” (2000, 126). Even areas seen as wilderness hold meaning for those who perceive them, and provide contrast in both positive and negative ways for those who live next to them.

What is a mountain if not impervious to the desires and endeavors of people? Inalterable, dark, steady yet giving way to landslides, obstructing views while simultaneously offering the very best vistas. Might it feel more correct to speak of land as pura montaña rather than as forest? Might it make the accomplishment of transforming the space into a town with fields and cattle and houses and families even more profound? And what does it mean to watch that same land return to being pura montaña? Has that meaning changed for those who now benefit from ecotourism and, very notably, the funds that support research scientists and academics from all over the world?

For my own part, I moved from elation at greeting that mountain wildness again to fear of the unknown to the reassurance of a known and maintained landscape. Naming the birds and the plants, learning the shape of the trees that attract the capuchin monkeys, relaxing about fearsome snakes and biting insects – all these actions help me reclaim this place as familiar. I move from being in pura montaña to viewing it comfortably from a safe distance.

For my students, the process takes longer. It all feels like pura montaña. One student from the Rockies reminds the group to fully exhale, to allow their bodies to adjust to the altitude. Everything is unfamiliar, so they bond like ducklings to our hostess who feeds them and smiles warmly at them. The dark night hours take them back to the mountain, where insects invade their casitas and internet and their beloved phones are unreliable. They turn to each other, commiserating about hardships and asking about which foods they miss the most. They spend time calling parents, scrolling social media, anything to take their minds off the mountain.

Eventually, though, they find that they know the song of the rufous-and-white wren. They look forward to empanadas for breakfast. The spider in their casita gets a name. They begin to talk about what they will miss when they leave. The montaña in their minds becomes replaced by the casitas that feel like home. They discover the place, space made meaningful. When they first arrived here, it was nothing but forest. Pura montaña.