If I had to choose a single page in a single cookbook that was the most precious to me, I would choose this one. 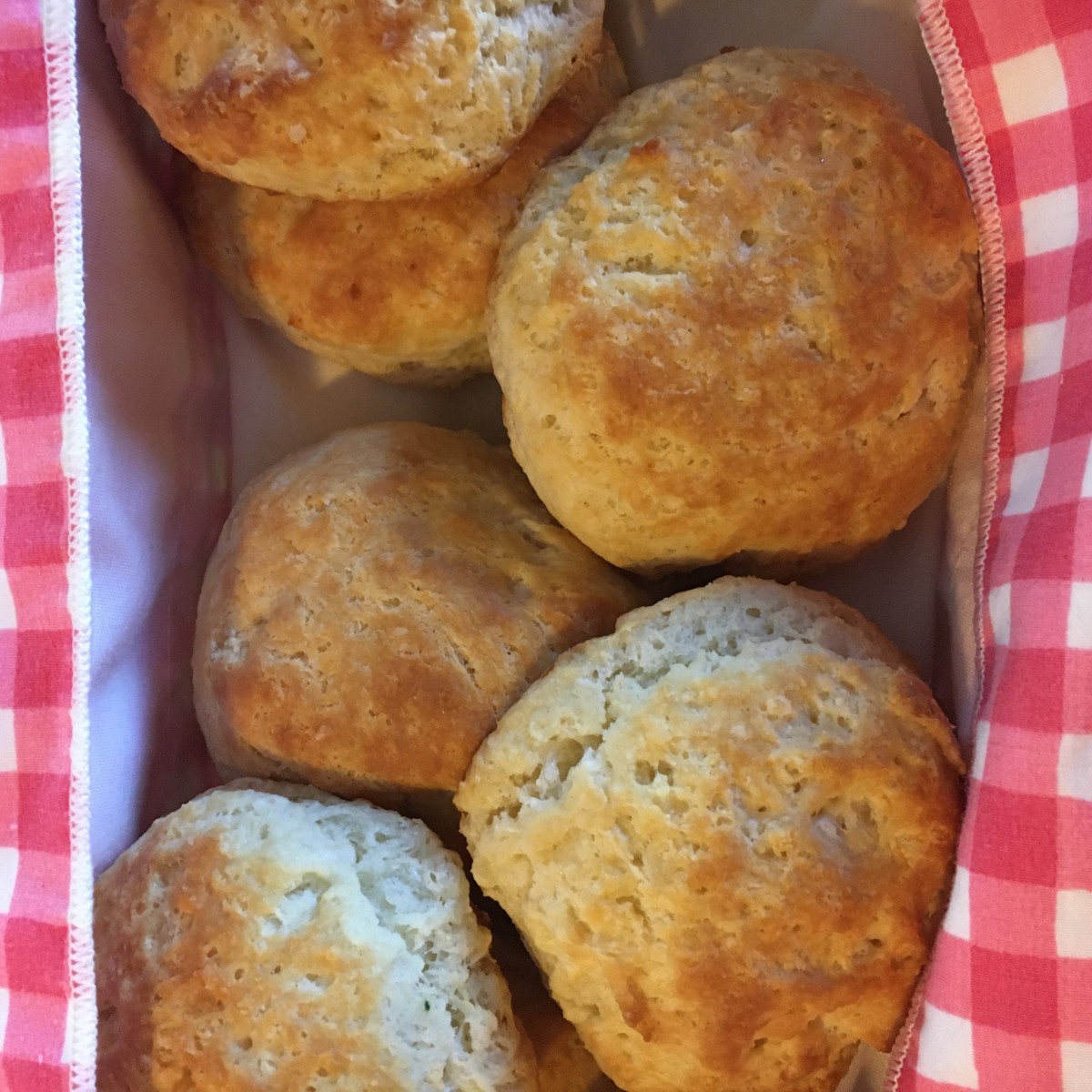 If I had to choose a single page in a single cookbook that was the most precious to me, I would choose this one: the recipes for cornbread and biscuits, written in my mother’s own hand, in a spiral bound composition notebook.

Stained from countless uses, it doesn’t actually have any instructions for the biscuits, save the temperature and how long to bake them. That knowledge didn’t need recording on paper for me. My mom wrote just five pages of recipes in this little notebook she gave me some time after I graduated from college. She later gave me a larger three-ring binder of Xeroxed recipes, also written in her own hand, from her own composition notebook with many more recipes that she’s felt the need to record over the years. It used to have a colorful collage she made glued on the front, but that has since been torn off from the number of times I pulled it off my cookbook shelf. I do have the black-and-white copy of that image on the first page in that notebook, along with her inscription to me.

That inscription bears a strong resemblance to the one she wrote in Edna Lewis’s classic cookbook, The Taste of Country Cooking. There she wrote:

Have a wonderful time with this book – I have.

I grew up in Richmond, Virginia, but neither side of my family was recently from the south. My maternal grandmother grew up in Memphis, but my mom had been raised in Kansas and New England, and my dad’s family was firmly from New York, having immigrated from Eastern Europe as Jews fleeing the pogroms and persecution at the turn of the 20th century. Nevertheless, my childhood memories of food are tied to the south, in large part because of my mom’s love of food and what food could tell you about a place. I recall a drive we made once, a rather significant drive in my memory, to a place that sold Lebanese food in rural Virginia. I tasted zaatar for the first time there, and remember the taste of their feta, so unlike what we bought in the grocery store.

We made a pilgrimage to Freetown, Virginia, as well. It was a good two hours from where we lived (it’s faster today with improved roads and someone who is not my mom driving) but it was the childhood home of Edna Lewis, the descendent of formerly enslaved people who founded the town once they secured their freedom. She wrote the recipe Mom used for biscuits, stewed blackberries, and a wide range of other dishes. The community wasn’t much to look at then. Mostly a post office and fields, really. Most folks had moved away. Indeed, Edna Lewis wrote in her introduction that after reminiscing with her siblings about gathering and preparing food:

I realized how much of the bond that held us had to do with food. Since we were the last of the original families, with no children to remember and carry on, I decided I wanted to write down just exactly how we did things when I was growing up in Freetown that seemed to make life so rewarding.

She wrote to preserve that connection to her ancestors, to the people who taught her about food and family and place. Her book is filled with stories, not just recipes. And the recipes reflect just who her people were in times of celebration. This is a book of Black joy if there ever was one.

While I was a kid, my mom’s work on voting rights, restitution for forced sterilizations, and abolishing the death penalty had opened my eyes pretty young (for a white girl) to the depths of racism and anti-Blackness in Virginia. Her love of food and culture, though, shared the other side of the coin too. Her work allowed us to violate the apartheid of the south in the 1970s and 80s, and so I saw celebration and everyday living. And I learned about biscuits.

In my south, biscuits need to be right. They need to be able to be opened without a knife, just by pulling apart while still warm. They need to be pillowy on the inside and a little crispy on the outside. They often call for lard in the recipe, though I use butter today. My mom made a sign she hung in her kitchen in the early 80s that read: “Everything cooked in real Butter unless Lard is more appropriate.” I must note that my mom has also had long stretches of eating vegan in her life, so this sign is not truly representative of her today. But you get the picture.

Like Edna Lewis, food ties my family together. My brother shares my tastes and food memories, and our favorite dishes come from our mom’s handwritten notebook. This morning as she ate these biscuits, my daughter sighed and said, “I have eaten some good food in my life.” For her, biscuits will have to be right too. Cornbread as well, which we only eat with butter and molasses. It’s almost not worth eating them without the molasses in our household. Biscuits should be served with butter and local honey or homemade jam. Today’s jam came from our neighbor, who made it with the figs from the tree of our neighbor on the other side.

I should note that the biscuit recipe that I love, that ties me to my mom, differs from the one that appears in Edna Lewis’s book. Perhaps I have a different version than my mom had. You’ll also see that my mom has many versions of it based on the size of your crowd. I’ll write the instructions for the one scaled for a family of four. Of course, mine is a family of three, so I cut them to come out with nine biscuits, for fairness. You’ll do what is best for you.

The way I make the biscuits has changed over time. My mom used to make them without any kneading, just dropping them into a pie dish, where they rose in the oven to touch their sides together. Now we both knead them three times and cut them. I use a drinking glass, though I own biscuit cutters, because I like them a certain size. Flour that glass, people! No matter how many times I’ve made these, I always think of my mom as I do it. Same with pie crusts. I learned how to make food right from her. I got my tongue from her – my tastes are her tastes. My sense of scale with cooking belongs to her – too much is always better than not enough. People at your table should feel like they can eat as much as they want. And my style of appreciation of food came from her too. One should exclaim – often – about the food we eat. If people aren’t raving, it’s probably not good. (This one is not especially a good lesson, I admit. Don’t follow this one! But I can’t be truly friends with someone who hasn’t been ecstatic about my cooking at some point. It’s a character flaw on my part, I know, but you can blame my mom.)

As I pass this recipe along to you, I’m passing along my love of my mom. Biscuits are love transformed into nourishment. They are particular, they are personal, they are place that can be carried with you when you move. Don’t thank me for this recipe, thank my mom and Edna Lewis.

Preheat the oven to 450 degrees. Mix the dry ingredients; then cut in the lard or butter until well combined and the flour looks a bit like cornmeal. I use a food processor these days. Add the buttermilk until just mixed (I do 11-13 pulses with the food processor). Turn out onto a floured surface and knead about three times. Flatten the dough gently with your hand until it is about ¾ inch thick. Cut out with a floured biscuit or a drinking glass. You should have about 8-9 biscuits. Place on an ungreased pan and bake for about 13 minutes until golden brown. Serve hot with butter, honey, and jam.

I have a Ph.D. in Anthropology and I'm happiest when learning about a new place and the people who live there. View all posts by entertaininganthro

2 thoughts on “Biscuits, My Mom, and Edna Lewis”